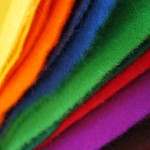 Over the years certain changes have taken place in the making of felt. The felted textile is made by using pressure, moisture and heat to interlock and mat the fibers together. Earlier in the middle age the fur was removed by hand from the hide and hot water and pressure was applied with hands to shrink the fabric together manually. Whereas today machinery is used to do these tasks, but the requirement to make felt remains the same.

There is an exception, that till the end of nineteenth century, the processing of felt was done with mercury. It was discovered that mercury had ill effects on the people who were using mercury to produce felt. It was a sort of poisoning which led to hallucinations, tremors and of sorts of psychotic syndromes. The hat makers were termed as ‘mad hatter’ because of psychotic symptoms that cropped from the poisoning caused by mercury. The hats made from felt materials were quite popular in winter months.